Take back our streets!

A woman out walking the dogs in Zoo Lake, Joburg’s iconic park; a woman getting some exercise, packing in some of the many physical and mental benefits of bodily activity… and suddenly she is overwhelmed, dragged into the bushes, brutally raped.
Terry Oakley-Smith’s brave account of what happened to her in 2015 aired in August on eNCA. It must have sent a chill through the hearts of every active woman who watched it (and not a few men, too); anyone whose exercise takes them into a public space would have needed to take a deep breath and speak firmly to themselves before putting on their running or cycling shoes again.
And that’s sad, because research shows that exercise that happens outdoors has some special benefits: 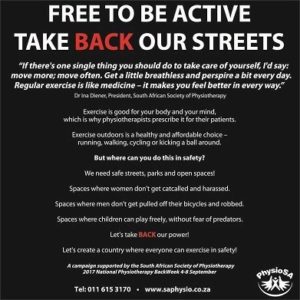 SA Society of Physiotherapy calls for better protection for walkers and runners
Did you know that, in the City of Johannesburg, you should not plant shrubs and bushes in front of your house on the pavement? It’s true. In terms of the by-laws, “No person may plant or cause to be planted, any tree, shrub or other plant on any public road or any sidewalk, footway or road reserve forming part thereof, which obstructs or interferes with pedestrian traffic on such sidewalk, footway or road reserve or allow any such tree, shrub or plant to remain on that sidewalk, footway or road reserve.”
Why? Because it’s dangerous for walkers to walk in the road itself. Plants filling up the pavement force walkers to step onto the tar, possibly into the path of vehicle traffic. But this by-law is seldom, if ever, enforced.

“People walking or running, using their legs to move around, are not less important than drivers,” says Dr Ina Diener, president of the South African Society of Physiotherapy (SASP). “They should be protected by our metropolitan police with as much attention as vehicle drivers receive – if not more, because they are more vulnerable.”

A walker or runner is not likely to survive an encounter with a vehicle made of metal – which explains why more than half the deaths on our roads are pedestrian deaths. And yet some 2.9 million workers walk to work, and 12.7 million learners walk to school every day.

The SASP, she adds, would like to see the municipal and traffic authorities take positive action to protect those who walk and run: